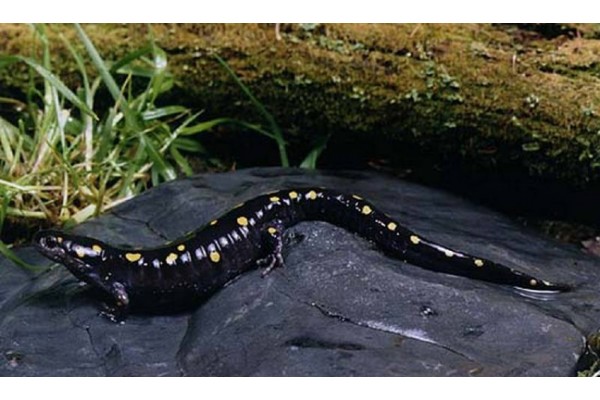 So secretive that we hardly ever see one, salamanders silently go about their lives in our Nova Scotia forests and waterways.

Salamanders are amphibians and have moist, smooth skin.  Moisture is essential for their lives. They mostly hibernate underground during the winter. They emerge from late March to May for mating and reproducing and females are usually larger than males.

Salamanders hide by day, and come out at night to dine on worms, centipedes, snails, spiders, slugs, even some snails, along with a medley of many different insects and their larvae.

To see yellow-spotted (mole) salamanders in the wild, one must take advantage of a rainy spring night to visit a pond or ditch.   Have no fear of these harmless little salamanders, for they have neither sting, nor bite.

These innocuous little creatures have sight and smell with which to catch their prey, and although they are deaf and mute, they can feel vibrations with their jaws and front legs.

Woodland salamanders may be found by carefully turning over rocks or logs in damp forests near waterways.  Admire and learn about them, but always gently put the rocks and logs back in place as these are their homes.

There are no lizards in Nova Scotia. The following are our five native species of salamanders 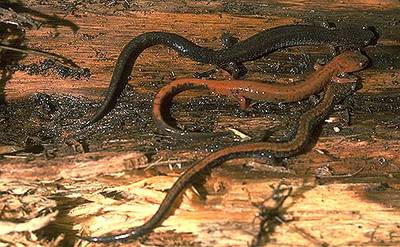 The eastern redback (Plethodon cinereus) salamander is found all over the province, and manifests in a number of different colours on its striped back.  A small percentage is completely red.  The gray leadback has no stripe at all.

The yellow-spotted (Ambystoma maculatum) salamander is found all over the province, and it is the biggest and most common of our salamanders. It is dark gray to blue-black with two rows of bright yellow spots.

The blue-spotted (Ambystoma laterale) salamander has a blue-black body with pale blue spots on its side and tail. It is found mostly in the northern mainland of Nova Scotia, but not along the Atlantic coast.

The four-toed (Hemidactylium scutatum) salamander is more uncommon to find. It breathes through its skin, is the only one with four toes on its back feet, and is the only one with a white belly.  The top of its body is orange to reddish brown with black spots. It is found mostly in the south-central part of our province.

The red-spotted newt (Notophthalmus viridescens viridescens) is classified as a salamander. Adults are olive green with small red spots on their backs and have yellow bellies. Juveniles, or red efts, are bright red or red-orange with two rows of black-bordered red spots, and are common all over Nova Scotia.

Salamanders are crucial to ecosystems, and contribute to the quality of human environments. Scientists study them to learn about their stunning abilities to regenerate limbs.  Salamanders skin produces chemicals with antibiotic, anesthetic and analgesic properties, all of which are used in human medicine.

These creatures are now being threatened by a lethal disease called Batrachochytrium salamandrivorns, which has decimated populations in some European countries. Bsal is a fungal pathogen that causes skin ulcerations that break down the delicate outer skin of salamanders and it is fatal.  The fear is that Bsal could migrate to North America, and cause a path of destruction in our salamander populations, much like white-nose syndrome that destroyed most of our little brown bats.

Information on salamanders was gathered from the Museum of Natural History website. To learn more about these and other wet land creatures, visit the Greenwing Legacy Center at the Shubenacadie Provincial Wildlife Park, opening on May 15.

Diana O’Connell volunteers at the Shubenacadie Provincial Wildlife Park. Contact her at nana.land or dianaoconnell@hotmail.com 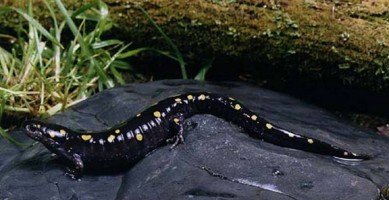 A closer look at salamanders of Nova Scotia