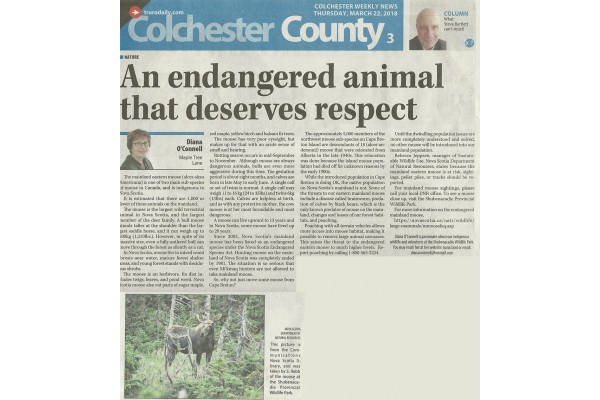 The mainland eastern moose (alces alces Americana) is one of two main sub-species of moose in Canada, and is indigenous to Nova Scotia.  It is estimated that there are 1000 or fewer of these animals on the mainland.

A bull moose stands taller at the shoulder than the largest saddle horse, and it can weigh up to 500kg (1210lbs.).   However, in spite of its massive size, even a fully-antlered bull can move through the forest as silently as a cat.

The moose has very poor eyesight, but makes up for that with an acute sense of smell and hearing.

Rutting season occurs in mid-September to November.  Although moose are always dangerous animals, bulls are even more aggressive during this time.

The gestation period is around eight months, and calves are born in late May to early June.  A single calf or set of twins is normal.  A single calf may weigh 11 to 16 kg (24 to 35lbs) and twins 6kg (13lbs) each.  Calves are helpless at birth, and as with any protective mother, the cow moose is at her most formidable and most dangerous.

A moose can live upward to 13 years and in Nova Scotia, some moose have lived up to 20 years.

Since 2003, Nova Scotia’s mainland moose has been listed as an endangered species under the Nova Scotia Endangered Species Act.  Hunting moose on the mainland of Nova Scotia was completely ended by 1981.  The situation is so serious that even Mi’kmaq hunters are not allowed to take mainland moose.

So, why not just move some moose down from Cape Breton?

The approximately 5000 members of the northwest moose sub-species on Cape Breton Island are descendants of 18 (alces andersonii) moose that were relocated from Alberta in the late 1940s.  This relocation was done because the island moose population had died off for unknown reasons by the early 1900s.

While the introduced population in Cape Breton is doing OK, the native population on Nova Scotia’s mainland is not. Some of the threats to our eastern mainland moose include a disease called brainworm, predation of calves by black bears, which is the only known predator of moose on the mainland, changes and losses of our forest habitats, and poaching.

Until the dwindling population issues are more completely understood and solved, no other moose will be introduced into our mainland population.

Rebecca Jeppsen, Manager, Sustainable Wildlife Use, Nova Scotia Department of Natural Resourses, states that because the mainland eastern moose is at risk, sightings, pellet piles, or tracks should be reported.

To see a moose close up, please visit the Shubenacadie Wildlife Park.

For more information on the endangered mainland moose, please visit: