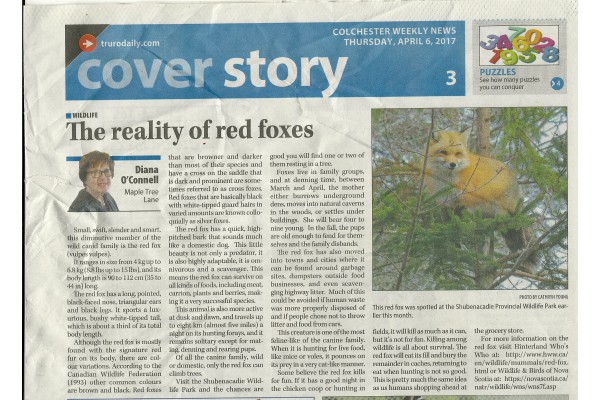 Small, swift, slender and smart, this diminutive member of the wild canid family is the red fox (vulpes vulpes).

The red fox has a long, pointed, black-faced nose, triangular ears and black legs. It sports a luxurious, bushy white-tipped tail, which is about a third of its total body length.

Although the red fox is mostly found with the signature red fur on its body, there are colour variations. According to the Canadian Wildlife Federation (1993) other common colours are brown and black.

Red foxes that are browner and darker than most of their species and have a cross on the saddle that is dark and prominent are sometimes referred to as cross foxes. Red foxes that are basically black with white-tipped guard hairs in varied amounts are known colloquially as silver foxes.

The red fox has a quick, high-pitched bark that sounds much like a domestic dog. This little beauty is not only a predator, it is also highly adaptable, it is omnivorous and a scavenger. This means the red fox can survive on all kinds of foods, including meat, carrion, plants and berries, making it a very successful species.

This animal is also more active at dusk and dawn, and travels up to eight km (almost five miles) a night on its hunting forays, and it remains solitary except for mating, denning and rearing pups.

Of all the canine family, wild or domestic, only the red fox can climb trees. Visit the Shubenacadie Wild-life Park and the chances are good you will find one or two of them resting in a tree.

Foxes live in family groups, and at denning time, between March and April, the mother either burrows underground dens, moves into natural caverns in the woods, or settles under buildings. She will bear four to nine young. In the fall, the pups are old enough to fend for themselves and the family disbands.

The red fox has also moved into towns and cities where it can be found around garbage sites, dumpsters outside food businesses, and even scavenging highway litter. Much of this could be avoided if human waste was more properly disposed of and if people chose not to throw litter and food from cars.

This creature is one of the most feline-like of the canine family. When it is hunting for live food, like mice or voles, it pounces on its prey in a very cat-like manner.

Some believe the red fox kills for fun. If it has a good night in the chicken coop or hunting in fields, it will kill as much as it can, but it's not for fun. Killing among wildlife is all about survival. The red fox will eat its fill and bury the remainder in caches, returning to eat when hunting is not so good. This is pretty much the same idea as us humans shopping ahead at the grocery store.

For more information on the red fox visit Hinterland Who's Who at: http://www.hww.ca/ en/wildlife/mammals/red-fox. html or Wildlife & Birds of Nova Scotia at: https://novascotia.ca/ natr/wildlife/wns/wns7f.asp 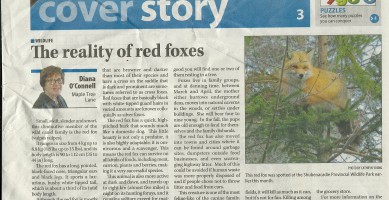