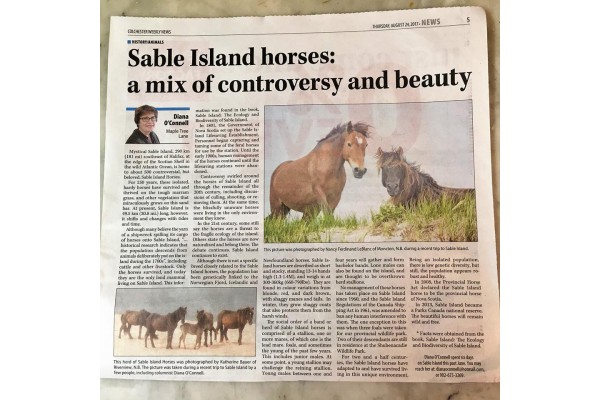 Mystical Sable Island, 290 km (181 mi) southeast of Halifax, at the edge of the Scotian Shelf in the wild Atlantic Ocean, is home to about 500 controversial, but beloved Sable Island Horses.

For 250 years, these isolated, hardy horses have survived and thrived on the tough marram grass, and other vegetation that miraculously grows on this sand bar. At present, Sable Island is 49.5 km (30.8 mi.) long, however it shifts and changes with tides and time.

Although many believe the yarn of a shipwreck spilling its cargo of horses onto Sable Island, “…historical research indicates that the population descends from animals deliberately put on the island during the 1700s”, including cattle and other livestock. Only the horses survived, and today they are the only land mammal living on Sable Island.

In 1801, the Government of Nova Scotia set up the Sable Island Lifesaving Establishment. Personnel began capturing and taming some of the feral horses for use by the station. Until the early 1900s, human management of the horses continued until the lifesaving stations were abandoned.

Controversy swirled around the horses of Sable Island all through the remainder of the 20th century, including discussions of culling, shooting, or removing them. At the same time, the blissfully unaware horses were living in the only environment that they knew.

Although there is not a specific breed closely related to the Sable Island horses, the population has been genetically linked to the Norwegian Fjord, Icelandic and Newfoundland horses. Sable Island horses are described as short and stocky, standing 13-14 hands high (1.3-1.4M), and weigh in at 300-360kg (660-790lbs). They are found in colour variations from blonde, red, and dark brown, with shaggy manes and tails. In winter, they grow shaggy coats that also protects them from the harsh winds.

The social order of a band or herd of Sable Island horses is comprised of a stallion, one or more mares, of which one is the lead mare, foals, and sometimes the young of the past few years. This includes junior males. At some point, a young stallion may challenge the reining stallion. Young males between one and four years will gather and form bachelor bands. Lone males can also be found on the island, and are thought to be overthrown herd stallions.

No management of these horses has taken place on Sable Island since 1960, and the Sable Island Regulations of the Canada Shipping Act in 1961, was amended to ban any human interference with them. The one exception to this was when three foals were taken for our provincial wildlife park. Two of their descendants are still in residence at the Shubenacadie Wildlife Park.

For two and a half centuries, the Sable Island horses have adapted to and have survived living in this unique environment. Being an isolated population, there is low genetic diversity, but still, the population appears robust and healthy.

In 2008, the Provincial Horse Act declared the Sable Island horse to be the provincial horse of Nova Scotia.

Facts were obtained from the book, Sable Island: The Ecology and Biodiversity of Sable Island.

Diana O’Connell spent six days on Sable Island this past June. You may reach her at: dianaoconnell@hotmail.com, or 902-673-3269.