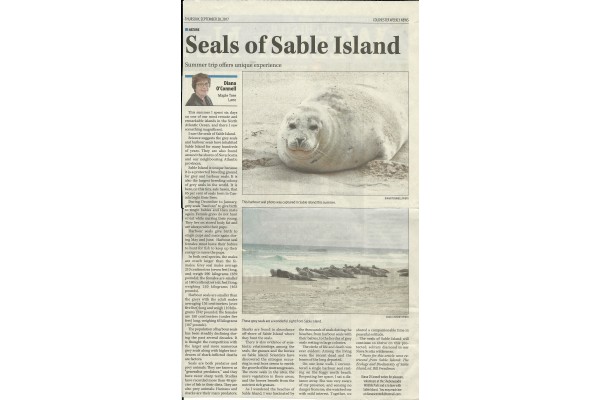 This past June, I spent six days on one of our most remote and remarkable islands in the North Atlantic Ocean, and there I saw the seals of Sable Island.

Science suggests that the grey seals and harbour seals have inhabited Sable Island for many hundreds of years. They are also found around the shores of Nova Scotia and our neigbouring Atlantic Provinces.

Sable Island is unique because it is a protected breeding ground for grey and harbour seals. It is also the largest breeding colony of grey seals in the world. It is here, on this tiny, safe haven, that 85% of seals born in Canada begin their lives.

During December to January, grey seals ‘haul out’ to give birth to single babies and then mate again. Female greys do not hunt or eat while nursing their young. They live on stored body fat and are always with their pups.

Harbour seals give birth to single pups and mate again during May and June. Harbour seal females must leave their babies to hunt for fish to keep up their energy to nurse the pups.

In both seal species, the males are much larger than the females.

The population of harbour seals has been steadily declining over the past several decades. It is thought that the competition with the larger and more numerous grey seals along with higher incidences of shark inflicted deaths are factors.

Seals are both predator and prey animals. They are known as ‘generalist predators’, and they have razor sharp teeth. Studies have recorded over 40 species of fish in their diets. They are also prey animals. Humans and sharks are their main predators. Sharks are found in abundance off-shore of Sable Island where they hunt the seals.

There is also evidence of symbiotic relationships among the seals, the grasses and the horses on Sable Island. Scientists have discovered that the nitrogen occurring in seal feces seems to enrich the growth of the marram grasses. The more seals in the area, the more vegetation in those areas, and the horses benefit from the nutrient rich grasses.

As I wandered the beaches of Sable Island, I was fascinated by the thousands of seals dotting the beaches, from harbour seals with their babies, to the hordes of grey seals resting in large colonies.

The circle of life and death was ever evident. Among the living were the recent dead and the bones of the long departed.

On one lone walk, I encountered a single harbour seal resting on the foggy north beach. Respecting her space, I sat a distance away. She was very aware of my presence, and sensing no danger from me, she watched me with mild interest. Together, we shared a companionable time in peaceful solitude.

The seals of Sable Island will continue to thrive on this protected, solitary diamond in our Nova Scotia wilderness.

Facts for this article were retrieved from Sable Island: The Ecology and Biodiversity of Sable Island, ed. Bill Freedman. 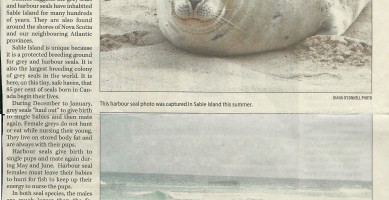