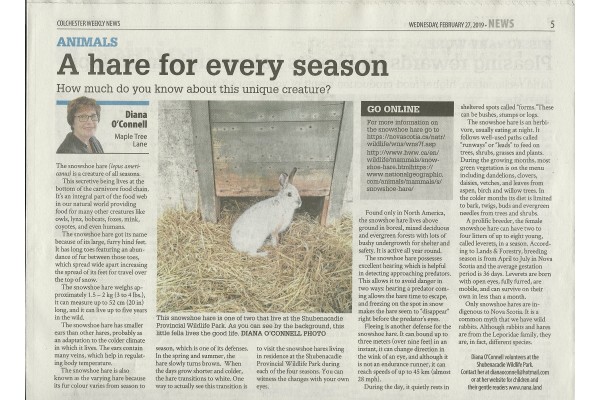 The snowshoe hare is a creature of all seasons. This secretive being lives at the bottom of the carnivore food chain.  It is an integral part of the food web in our natural world providing food for many other creatures like owls, lynx, bobcats, foxes, mink, coyotes, and even humans.

The snowshoe hare got its name because of its large, furry hind feet. It has long toes featuring an abundance of fur between those toes.  Its toes can spread wide apart increasing the spread of its feet for travel over the top of snow.

The snowshoe hare has smaller ears than other hares, probably as an adaptation to the colder climate in which it lives.  The ears contain many veins, which help in regulating body temperature.

The snowshoe hare is also known as the varying hare because its fur colour varies from season to season, which is one of its defenses. In the spring and summer, the hare slowly turns brown.  When the days grow shorter and colder, the hare transitions to white. One way to actually see this transition is to visit the snowshoe hares living in residence at the Shubenacadie Wildlife Park during each of our four seasons.  You can witness the changes with your own eyes.

Found only in North America, the snowshoe hare lives above ground in boreal, mixed deciduous and evergreen forests with lots of bushy undergrowth for shelter and safety. It is active all year round.

The snowshoe hare possesses excellent hearing which is helpful in detecting approaching predators.  This allows it to avoid danger in two ways: hearing a predator coming allows the hare time to escape, and freezing on the spot in snow makes the hare seem to “disappear” right before the predator’s eyes.

Fleeing is another defense for the snowshoe hare.  It can bound up to three meters (over nine feet) in an instant, it can change direction in the wink of an eye, and although it is not an endurance runner, it can reach speeds of up to 45 km (almost 28 mph).

During the day, it quietly rests in sheltered spots called “forms”. These can be bushes, stumps or logs.

The snowshoe hare is an herbivore, usually eating at night. It follows well-used paths called “runways” or “leads” to feed on trees, shrubs, grasses and plants. During the growing months, most green vegetation is on the menu including: dandelions, clovers, daisies, vetches, and leaves from aspen, birch and willow trees. In the colder months its diet is limited to bark, twigs, buds and evergreen needles from trees and shrubs.

A prolific breeder, the female snowshoe hare can have two to four litters of up to eight young, called leverets, in a season. According to Lands & Forestry, breeding season is from April to July in Nova Scotia. Average gestation period is 36 days.  Leverets are born with open eyes, fully furred, are mobile, and can survive on their own in under a month.

Only snowshoe hares are indigenous to Nova Scotia. It is a common myth that we have wild rabbits. Although rabbits and hares are from the Leporidae family, they are, in fact, different species.

For more information on the snowshoe hare please visit:

(Diana O’Connell volunteers at the Shubenacadie Wildlife Park.  Contact her at dianaoconnell@hotmail.com or at her website for children and their gentle readers www.nana.land) 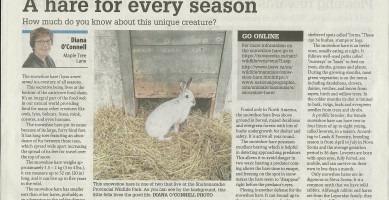