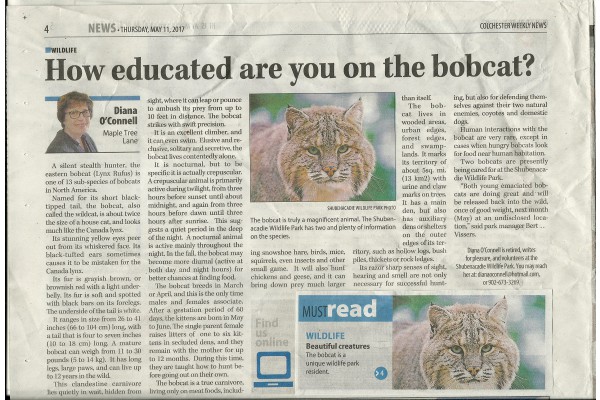 A silent stealth hunter, the eastern bobcat (Lynx Rufus) is one of 13 sub-species of bobcats in North America.

Named for its short black-tipped tail, the bobcat, also called the wildcat, is about twice the size of a house cat, and looks much like the Canada lynx.

Its stunning yellow eyes peer out from its whiskered face. Its black-tufted ears sometimes causes it to be mistaken for the Canada lynx.

Its fur is grayish brown, or brownish red with a light under-belly. Its fur is soft and spotted with black bars on its forelegs. The underside of the tail is white.

This clandestine carnivore lies quietly in wait, hidden from sight, where it can leap or pounce to ambush its prey from up to 10 feet in distance. The bobcat strikes with swift precision.

It is an excellent climber, and it can even swim. Elusive and reclusive, solitary and secretive, the bobcat lives contentedly alone.

It is nocturnal, but to be specific it is actually crepuscular. A crepuscular animal is primarily active during twilight, from three hours before sunset until about midnight, and again from three hours before dawn until three hours after sunrise. This suggests a quiet period in the deep of the night. A nocturnal animal is active mainly throughout the night. In the fall, the bobcat may become more diurnal (active at both day and night hours) for better chances at finding food.

The bobcat breeds in March or April, and this is the only time males and females associate. After a gestation period of 60 days, the kittens are born in May to June. The single parent female raises litters of one to six kittens in secluded dens, and they remain with the mother for up to 12 months. During this time, they are taught how to hunt before going out on their own.

The bobcat is a true carnivore, living only on meat foods, including snowshoe hare, birds, mice, squirrels, even insects and other small game. It will also hunt chickens and geese; and it can bring down prey much larger than itself.

The bobcat lives in wooded areas, urban edges, forest edges, and swamp lands. It marks its territory of about 5 sq. mi. (13 km) with urine and claw marks on trees. It has a main den, but also has auxiliary dens or shelters on the outer edges of its territory, such as hollow logs, bush piles, thickets or rock ledges.

Its razor sharp senses of sight, hearing and smell are not only necessary for successful hunting, but also for defending themselves against their two natural enemies, coyotes and domestic dogs.

Human interactions with the bobcat are very rare, except in cases when hungry bobcats look for food near human habitation.

Two bobcats are presently being cared for at the Shubenacadie Wildlife Park.

"Both young emaciated bobcats are doing great and will be released back into the wild, once of good weight, next month (May) at an undisclosed location," said park manager Bert Vissers.

Diana O'Connell is retired, writes for pleasure, and volunteers at the Shubenacadie Wildlife Park. 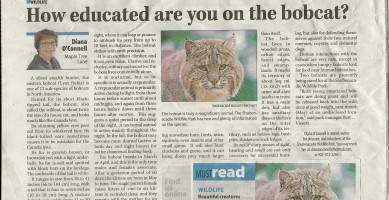