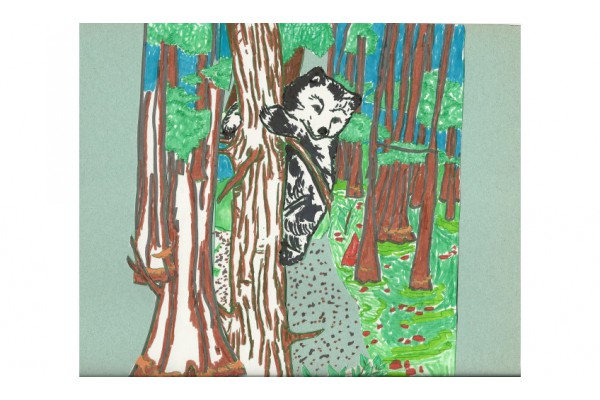 Olivia was just leaving the school yard to walk home. She heard a faint rustling noise in the woods behind the school. What could it be?

The bright, nature-loving girl peered through the trees with her sharp hazel brown eyes. Could it be…no…but, yes it was. It was her old friend Grumpy Bear.

“Halloo”, she called softly, “It’s me, Olivia. What are you doing here?”

“I was looking for food”, said the black bear, keeping himself hidden behind a copse of birch wood trees, “and I fear I have come too close to the town. There didn’t used to be humans in this area; it used to be lovely blueberry patches. I haven’t been this way in a long time. It has all changed and I’m frightened.”

Olivia looked around to see if anyone was nearby and when she saw no one, she quietly spoke to Grumpy from a distance. “Why are you frightened?” asked the child.

“Some teachers saw me and started yelling and they gathered the children up and took them into the school. After a while, some big men arrived and came into the woods looking for something big and scary. The teachers said it was lurking in the woods. I didn’t know what it could be, so I quietly climbed that big, bushy tree and hid in the darkness of the branches. I didn’t want the big, scary thing to get me either.”

Grumpy looked over his shoulder and peered around cautiously. He wanted to go home to the clearing under the big maple tree in his own woods, but quite frankly, Grumpy was scared stiff.

Now, as it happens, Olivia had been at school earlier in the day when all the kerfuffle took place, and she had been herded into the school by the frightened grownups along with all the other children. She was a well-behaved little girl and followed all the rules at her school. It was only after school when she was on her way to her Nana’s house that she found herself hearing the rustling in the nearby woods.

Olivia quietly stepped just inside the tree-line, out of sight of the school. She whispered softly, “Grumpy, I’m sad to have to tell you this, but the townspeople say that the big, scary thing lurking in the woods is you.”

“Meee!!” exclaimed the astonished black bear. “How can that be? I’m so shy that people never see me when they go for their nature walks in the woods. And, how can they say that I’m “lurking” in the woods? I live in the woods. This is my home. Oh dear, I’m so confused”, moaned the poor big, nervous bear.

"They’ve read too many fairy tales, and they have heard scary stories in the news about the animals that live just beyond the edges of their towns. But, don’t despair Grumpy, many humans know the real truth and we’ll just keep trying to help the others to understand.”

“Yes”, mused Grumpy, who was now calming down and getting his wits about him again, “let’s hope that we can all learn to live together in our beautiful world.”

Olivia and Grumpy looked around in the cool, green forest. There was no big, scary monster in there. There was only a shy black bear who had been trying to find food and to live in peace.

Grumpy shook himself off, ambled back into the forest depths, and he found his way back to the big maple tree in the clearing where the other forest folk dwelled.

Grumpy hoped that maybe someday more humans would come to understand the real facts of the wildlife that lives around them. 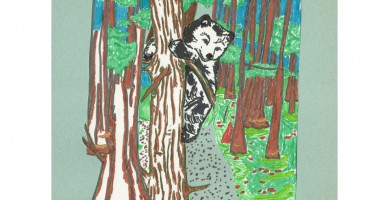