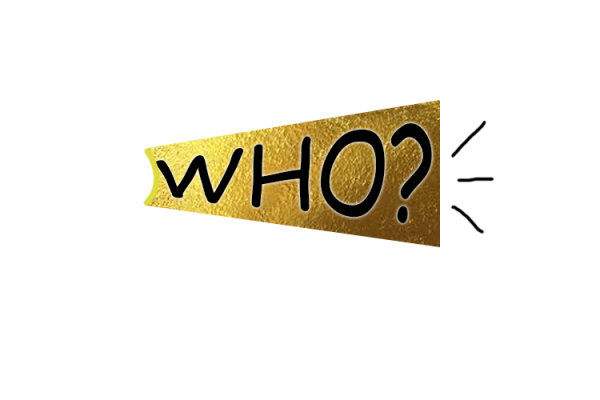 The owl family was excited. Too-whit-too-woo! My, oh my, there was such a-twitter and a-do.

Mamma and Daddy called their parents. “What?” twittered Mamma’s parents.

“Oh my dear, twittered the whole owl family. “Can it be? Is it true?”

The fluttering and the whoo-ing caused all the forest creatures to look up into the huge maple tree where the owls lived. 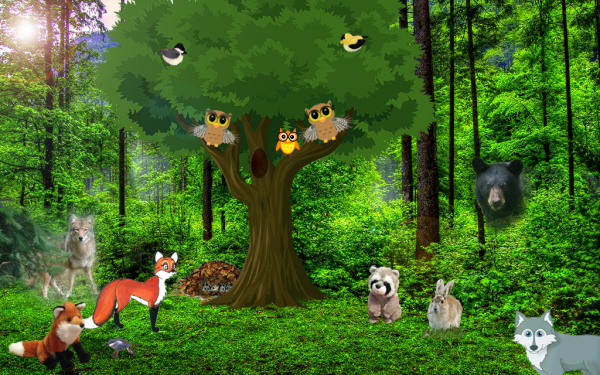 “What’s the ruckus?” called up Grumpy Bear who was awakened too early from his sleep.

“Oh, my dear”, the owls whooted back, “we’re having company, very special company.”

Now, as you might guess, this was not just regular every day company from their forest friends. No sir, this was going to be very special company indeed.

For the next minute, you could hear a pine needle drop. The forest folk thought the news over. Yes, this would be very special company indeed and everyone wanted to meet the owl family’s special company.

Who would it be? How long would they stay? Should there be a party? My, oh my, there was so much to consider.

Well, there was no more sleep to be had now, so everyone got up and came to the big tree to find out more. There was such a hub-bub of whoo-ing, growling, twittering, chirping, barking, yowling, howling, grunting and huffing. No one could hear what the other was saying.

Finally, Grumpy Bear stood up on his hind legs and roared for order. Now, when Grumpy stood at his very tallest and roared at his very loudest, folks paid attention. Everyone quieted down and turned to old Grumpy.

“Now, look-ee here,” grumbled Grumpy, “Mamma and Daddy Owl have big news and we all want to hear about it.” Yes, this was going to be big news, indeed. 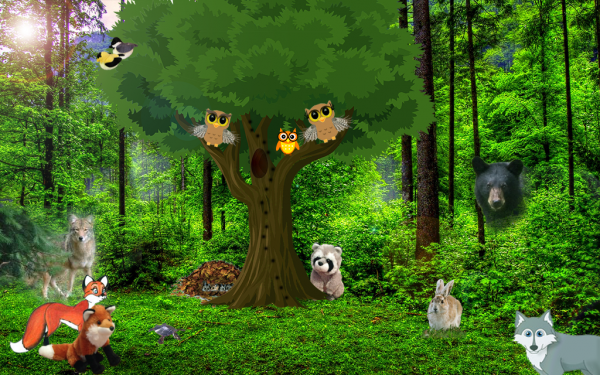 Again, the forest became a din of whoo-ing, growling, twittering, chirping, barking, yowling, howling, grunting and huffing. The anticipation was too much for the giant ant hill in the nearby field, and so, a committee of seventeen ants spilled out of the top of the anthill, formed a long straight line, and then they marched straight over to the big maple tree. Those seventeen determined ants marched right up the side of the big tree, and right up to the large, dark, round hole that was the entrance to the owl family’s home. “This waiting will make us antsier than ever,” they said all together. "When will you tell us? And, who will it be?”

Daddy Owl fluffed his feathers until he was as big and as round and as fluffy as, well, I don’t know what, and then he fluffed his feathers some more, and he stared down at his astonished neighbours with his big, round, golden eyes. Then, Daddy Owl blew out a long, loud, “Who-o-o-o-o, indeed!”

Well, after that, everyone became as quiet as the mouse family who lived in a cozy pile of leaves under an old stump.

Mamma Owl looked out over at the two high hills in the distance. She fluffed herself up into another big, brown fluffy ball and let out the longest who-o-o-o-o-o that the forest folk had ever heard.

It was so loud, and it was so long that the trees shuddered and all their leaves rustled, and finally whispered, “We know who.”

The neighbourhood creatures stopped talking and looked up into the trees. “For goodness sake, who?” they growled, twittered, chirped, barked,yowled, howled, grunted and huffed.

The leaves rustled and whispered, but they did not say who. The trees and their rustling leaves stood in silence. They looked out to the two high hills in the distance and they saw exactly who the special company would be.

Well, sir, the seventeen antsy ants just HAD to know, so they marched up to the tip-top of the owl family’s tall, ancient tree. The ants perched themselves on the highest branch that all seventeen of them could fit on, and they looked out over the land to the two high hills in the distance. The seventeen ants then saw who, and they too stared in silence.

The forest folk on the ground set up another cacophony of growling, twittering, chirping, barking, yowling, howling, grunting and huffing, but neither the owl family, nor the trees, nor their leaves, nor any of the seventeen ants would say who.

“Well…who…?” clambered the waiting crowd below.

The coyotes yowled, the wolves howled and the foxes yipped. They couldn’t climb the big old trees, (although it must be said that foxes can climb some trees) but…they COULD do something else! The coyotes, the wolves and the foxes looked at one another, all of them getting the same idea at the same time.

“Ah-oo…,” yowled Cody Coyote, “we should have thought of this before!”

Felicity Fox led the quickly formed canine committee and off they raced, and everyone knows that nothing can run faster than coyotes, wolves and foxes.

Moments later, they arrived at the two high hills.

The wild canines stopped short in their tracks, almost piling into one another. Not one sound came out of any of the wild dogs. They were amazed and awestruck. Could this be the special company? Cody Coyote, Wendy Wolf and Felicity Fox stood waiting.

“Halloo!” she called out, her long, silky brown ponytail bouncing as she skipped along.

The wild dogs watched as the tiny girl approached them.

She was wearing sparkly blue jeans, purple running shoes, and a sunny pink hoodie. In her hand was a basket covered with the softest, bluest blanket you ever saw. 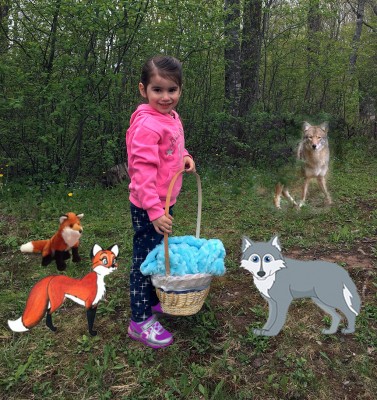 “Is this the special company?” wondered Wendy Wolf.

“Who are you?” called Cody Coyote.

The wild dogs put on their friendliest and softest facial expressions and gently approached the little girl with the wicker basket. The little girl smiled at the coyote, the wolf and the fox.

“Are you the welcoming committee?” she inquired.

“Actually”, answered Cody a little shyly, “you could call us the ‘wondering’ committee.”

Felicity Fox added, “We were wondering so hard that we had to get here to see.”

“Are you the special company? Are you who?” asked Wendy Wolf.

“My name is Olivia”, smiled the tiny little girl with the big, hazel brown eyes, “and I’m looking for the owl family that lives in the big maple tree in the forest. Do you know where that is?”

So, the tiny girl with the wicker basket followed Cody Coyote, Wendy Wolf, and Felicity Fox, who, I might add, were very proud indeed to be the ones to lead Olivia to the waiting owl family.

Very soon they entered the forest and not long after that the little group arrived at the big maple tree where the owl family and all their neighbours waited.

Well now, the forest folk had two questions. Who was Olivia, and second, what was in that basket?

So, the forest folk waited quietly around the base of the owl family’s big maple tree.

The owl family emerged from the large hole in the tree and looked down to the ground.

“Now, will you tell us who?” the forest folk growled, twittered, chirped, barked, yowled, howled, grunted and huffed up at the owl family in the big maple tree. 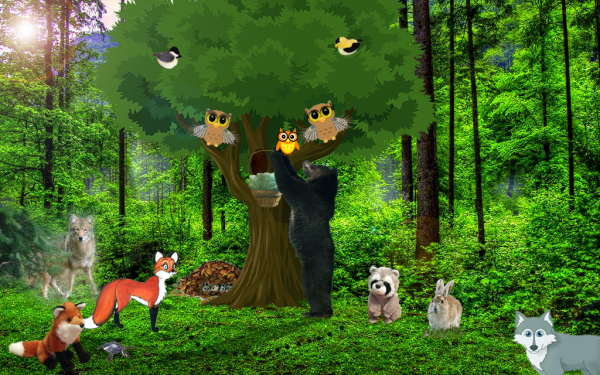 Grumpy Bear ambled over to Olivia. Grumpy was the tallest of the forest folk and Olivia knew that Grumpy was the one for what was to happen next. Olivia handed the basket to Grumpy. Grumpy then stretched himself to his very tallest. Carefully reaching even higher with his long, furry arm, Grumpy gently set the basket into the sturdy crook of the great maple tree in front of the large entrance to the owl family’s nest.

Suddenly, out of the basket popped a tiny, fuzzy ball of feathers.

“Who…?” murmured the astonished crowd.

“THIS is the surprise.” announced Mamma Owl, gazing fondly at her new baby.

“And, THIS is the special company!” declared Daddy Owl pointing to Olivia.

“But?…What?…How?…Who…?” questioned the puzzled forest folk all at once.

“Well”, said Daddy Owl, “there was a big mix-up and our baby was delivered to Olivia’s house on Maple Tree Lane, instead of our big maple tree here in the forest. That’s what!”

“So”, added Olivia, “when I heard the leaves whispering through the trees all the way over to my house on Maple Tree Lane, that’s how I knew what to do and where to go.”

Mamma Owl cuddled her new baby in her wings and finally announced her big news, “THIS is Who!”

And so, after his first big adventure with Olivia from over on Maple Tree Lane, Baby Who Owl, nestled deep in his Mamma’s soft wings, there in the big maple tree in the forest, and went to sleep. 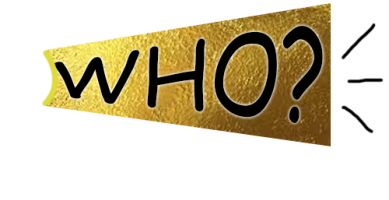