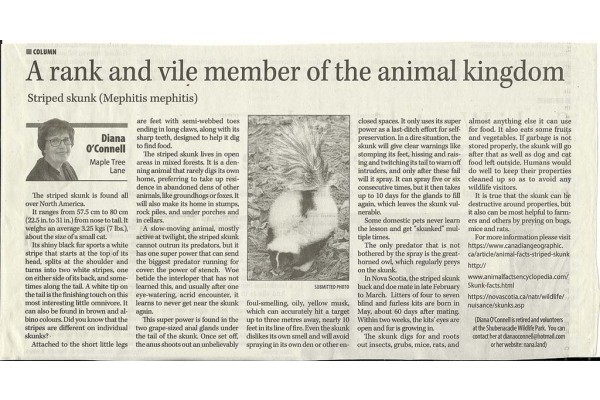 The striped skunk is found all over North America.

Its shiny black fur sports a white stripe that starts at the top of its head, splits at the shoulder and turns into two white stripes, one on either side of its back, and sometimes along the tail. A white tip on the tail is the finishing touch on this most interesting little omnivore.  It can also be found in brown and albino colours. Did you know that the stripes are different on individual skunks?

Attached to the short little legs are feet with semi-webbed toes ending in long claws, along with its sharp teeth, designed to help it dig to find food.

The striped skunk lives in open areas in mixed forests.  It is a denning animal that rarely digs its own home, preferring to take up residence in abandoned dens of other animals, like groundhogs or foxes.  It will also make its home in stumps, rock piles, and also under porches and in cellars.

A slow moving animal, mostly active at twilight, the striped-skunk cannot outrun its predators, but it has one super power that can send the biggest predator running for cover: the power of stench.  Woe-betide the interloper that has not learned this, and usually after one eye-watering, acrid encounter, it learns to never get near the skunk again.  This super power is found in the two grape-sized anal glands under the tail of the skunk.  Once set off, the anus shoots out an unbelievably foul-smelling, oily, yellow musk, which can accurately hit a target up to three meters away, nearly 10 feet in its line of fire.  Even the skunk dislikes its own smell and will avoid spraying in its own den or other enclosed spaces.  It only uses its super power as a last-ditch effort for self-preservation. In a dire situation, the skunk will give clear warnings like stomping its feet, hissing and raising and twitching its tail to warn off intruders, and only after these fail will it spray.  It can spray five or six consecutive times, but it then takes up to 10 days for the glands to fill again, which leaves the skunk vulnerable.

Some domestic pets never learn the lesson and get “skunked” multiple times.

The only predator that is not bothered by the spray is the great-horned owl, which regularly preys on the skunk.

In Nova Scotia, the striped skunk buck and doe mate in late February to March.  Litters of four to seven blind and furless kits are born in May, about 60 days after mating.  Within two weeks, the kits’ eyes are open and fur is growing in.

The skunk digs for and roots out insects, grubs, mice, rats, and almost anything else it can use for food. It also eats some fruits and vegetables. If garbage is not stored properly, the skunk will go after that as well as dog and cat food left outside. Humans would do well to keep their properties cleaned up so as to avoid any wildlife visitors.

It is true that the skunk can be destructive around properties, but it also can be most helpful to farmers and others by preying on bugs, mice and rats. 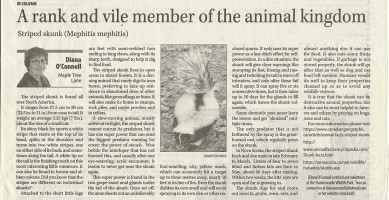