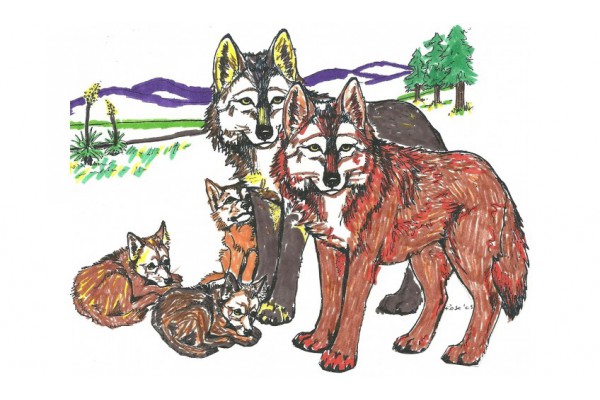 “Someone comes”, whispered the leaves on the trees in the forest.

Cody Coyote’s ears pointed straight up and turned this way and that way.  His parents hushed the others in the pack. Highly alerted, the coyote family melted into the safety of the heavy bush.  “Who comes here?” wondered the curious, but shy wild dogs.

Small twigs cracked and bushes rustled as someone moved as quietly as possible in the silence of the forest.

The birds made no sound. They kept a sharp watch on the stranger who was carefully creeping through the bush.  This was not one of the regular forest folk, so no one was going to take a chance and show themselves.  Who was this stranger?

Father and Mother guided their youngsters to their secret hiding place.  Cody, and his sisters, Candace and Cordelia followed.  In the wild, animal children always obey their parents.  It is always about safety.

The coyotes watched the stranger.  Now they could see what it was.  It was a 2-legger.  It was a man!  2-leggers were dangerous for the forest folk and were best avoided.

Somehow, though, this human seemed different.  He seemed content to be alone in the forest.  He carried things with him to make shelter and food.  He carried binoculars, a notebook and a pencil.

The man looked around.  He saw a nice, sheltered spot with a little clearing beside a small brook.  He made himself a campsite and settled down.  He just watched and sat very quietly.

After a while, the birds got used to him being there and they began to chirp and sing again.  The other forest folk, including the coyote family, still made themselves scarce.   They watched the man.

This was no ordinary man.  He was a wildlife biologist.  He was here to see what he could learn about the secret life of the eastern coyote in our Nova Scotia forests.  The man’s name was Jason.

The spot Jason chose to make his camp was perfect for what was called a rendezvous spot.  Coyote families come to these safe spots with their pups to teach them the ways of the forest.

Mother and Father still kept their pups hidden. They wondered, “What did the man want?  Was the coyote family in danger?”

After a few days of quietly being part of the forest and causing no harm, Jason became part of the scenery.

Carefully watching for danger, the coyote family came and went in the safety of the heavy bush.

More days passed, and the coyotes decided it might be safe to visit the rendezvous spot.  Mother and Father took up watch from a high spot in the heavy bush.  The parents could see all around while their cubs explored and played.

Cody stepped cautiously into the clearing near the brook, but he stayed on the far side of the area away from Jason’s campsite.

Candace and Cordelia looked all around and sniffed the air.  They smelled the faint scent of the man.  They knew that Jason was there, but the young coyotes were far enough away to feel safe.

Jason sat very still and watched the young coyotes as they explored the edge of the clearing.

A patch of blueberries grew at the edge of the clearing.  Coyotes love blueberries.  Cody, Candace and Cordelia tip-toed over to the lovely berry patch and had themselves a healthy snack.

Jason watched quietly through his binoculars.

The coyote parents watched Jason with their sharp eyes.

Jason carefully laid the binoculars down, picked up his pencil and paper, and wrote some notes.

The gentle morning breezes changed direction, and the hidden parents caught the scent of the wildlife biologist.

The coyote pups smelled the breeze and saw their parents’ heads nodding from the bush.  Time to go.  Off they scampered into the forest, following their parents back to the safety of the hidden den.  The coyote family made no sound.  They simply disappeared into the dense forest, but they left something behind in the soft ground. They left their paw prints.

Jason finally got what he was looking for, tracks to follow.

After a time of remaining perfectly still, Jason quietly and carefully followed the tracks through the forest.

Hours later, he found what he was looking for.  Not wanting to cause harm, or to scare the coyote family, he kept his distance and again, looked through his binoculars.

There, in the roots of a large fallen tree, was the coyote family’s den.  If you didn’t know what to look for, you would never have noticed it.  The area around the den was as neat as a pin.  Coyotes know to keep their yards cleaned up so as not to attract attention.

Jason put his binoculars away and slowly took his camera out of one of his many pockets.  This was the prize the scientist was after.  He took some pictures of the den, and then he turned and quietly left the area.

Mother and Father Coyote sniffed the air carefully, but kept their youngsters inside for the rest of the afternoon.

As the day turned to evening, the parents knew that the man was gone from the forest.  All was well.  Cody, Candace and Cordelia came out to enjoy the evening air. 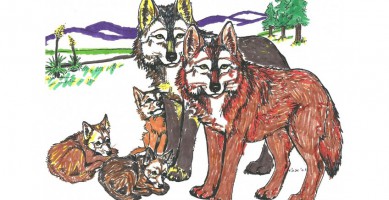