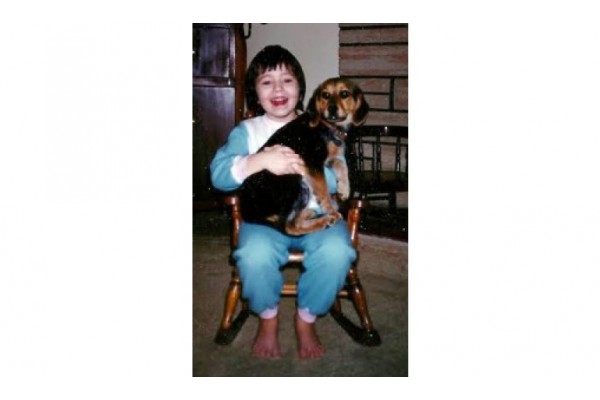 It was a cold January morning. Daylight was almost here, but not quite.

“Come on, Casey, it’s time for our walk”, called Mommy as she put on her boots and jacket. The young, yellow Labrador retriever hurried to the back door. It was so early on this morning that Casey’s little mistress, Meghan, was still in her pajamas and she was eating her breakfast.

Casey and Mommy went outside. Casey raced and ran back and forth, sniffing and snorting at the delightful smells that only a dog can enjoy.

“Let’s go!” called Mommy as she headed up into the forest behind their little bungalow in the country.

Casey charged up into the woods and ran helter-skelter in the bush. The delighted yellow dog was determined to be every place he could possibly be, all at the same time.

Mommy’s walk was most enjoyable too, but she stayed to the rough path that she knew.

Very soon, they came to a place where the path went off in two directions. Mommy went on one path, but Casey took the other.

“Now what?” wondered Mommy to herself, and she called to her dog.

Mommy headed over to the other path and followed the non-stop barking. What was that dog after now?

Mommy caught up to Casey, who was standing over something at the bottom of a spruce tree. It was a small dark mound of…well…Mommy didn’t know what it was. It was still kind of dark in the woods and all Mommy knew for sure was that her foolish yellow dog was scaring that poor, cowering little thing on the ground.

“Casey, you stop that!” ordered Mommy, who then, tramped up to her excited dog and pushed him aside.

“What is this poor little thing?” she asked no one in particular and bent down to the quivering and shivering little…what?

Not thinking of what, Mommy reached down and picked up the shivering little black ball of something furry. She brought the little creature up into her arms. The tiny animal unfurled itself and looked into Mommy’s wondering eyes as if to say, “Thank goodness you found me.”

Looking up at Mommy with large, soft brown eyes, the little lost puppy somehow realized that it was now safe. Animals can just know things sometimes and so can some grown up humans. In that moment, both the little dog and Mommy just knew that everything would be OK.

Mommy had no idea what she was picking up until the dear little beagle puppy showed her face. Later, everyone was very relieved that it had not been a porcupine…especially Mommy!

Meanwhile, Casey was jumping and barking and wanting Mommy to show him what they had found.

Bending down, Mommy spoke softly, “It’s a puppy, Casey, a little puppy and you’re scaring her!”

Mommy held the little puppy close and just knew how it was all going to end up without having to think it over. Mommy gazed down at the trusting little beagle puppy who had stopped shivering and nestled close in Mommy’s warm arms. She said to the puppy, “Daddy doesn’t know it yet, but we have another dog.”

Casey, Mommy and Meghan fell in love with the abandoned puppy. They named her Penny.

It took Daddy a whole week to realize he had no choice, and that he had to accept the little foundling beagle into the family. Finally, he threw his hands up and declared, “Oh, all right, but no more dogs!” 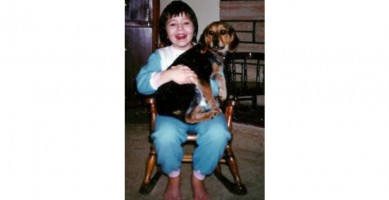 Casey Gets a Puppy