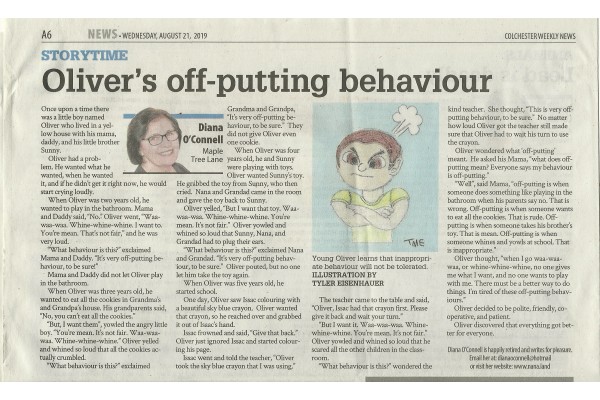 Once upon a time there was a little boy named Oliver who lived in a yellow house with his Mama, his Daddy, and his little brother Sunny.

Oliver had a problem.  He wanted what he wanted, when he wanted it, and if he didn’t get it right now, he would start crying loudly.

When Oliver was two years old, he wanted to play in the bathroom.  Mama and Daddy said, “No”.  Oliver went, “Waa-waa-waa. Whine-whine-whine. I want to. You’re mean. That’s not fair”, and he was very loud.

“What behaviour is this?” exclaimed Mama and Daddy. “It’s very off-putting behaviour, to be sure!” Mama and Daddy did not let Oliver play in the bathroom.

“What behaviour is this?” exclaimed Grandma and Grandpa, “It’s very off-putting behaviour, to be sure.”  They did not give Oliver even one cookie.

When Oliver was four years old, he and Sunny were playing with toys.  Oliver wanted Sunny’s toy. He grabbed the toy from Sunny. Sunny cried.  Nana and Grandad came in the room and gave the toy back to Sunny. Oliver yelled, “But I want that toy. Waa-waa-waa. Whine-whine-whine. You’re mean. It’s not fair.”  Oliver yowled and whined so loud that Sunny, Nana, and Grandad had to plug their ears.

“What behaviour is this?” exclaimed Nana and Grandad. “It’s very off-putting behaviour, to be sure.”  Oliver pouted, but no one let him take the toy again.

When Oliver was five years old, he started school.

One day, Oliver saw Issac colouring with a beautiful sky blue crayon.  Oliver wanted that crayon, so he reached over and grabbed it out of Isaac’s hand.

Issac frowned and said, “Give that back.” Oliver just ignored Issac and started colouring his page.

Issac went and told the teacher, “Oliver took the sky blue crayon that I was using.”

The teacher came to the table and said, “Oliver, Issac had that crayon first. Please give it back and wait your turn.”

“But I want it. Waa-waa-waa. Whine-whine-whine. You’re mean. It’s not fair.” Oliver yowled and whined so loud that he scared all the other children in the classroom.

“What behaviour is this?” wondered the kind teacher.  She thought, “This is very off-putting behaviour, to be sure.”  No matter how loud Oliver got the teacher still made sure that Oliver had to wait his turn to use the crayon.

Oliver wondered what ‘off-putting’ meant.  He asked his Mama, “What does off-putting mean? Everyone says my behaviour is off-putting”.

Oliver thought, “When I go waa-waa-waa, or whine-whine-whine, no one gives me what I want, and no one wants to play with me. There must be a better way to do things.  I’m tired of these off-putting behaviours.”

Oliver decided to be polite, friendly, cooperative, and patient.

Oliver discovered that everything got better for everyone. 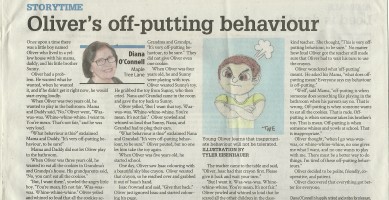